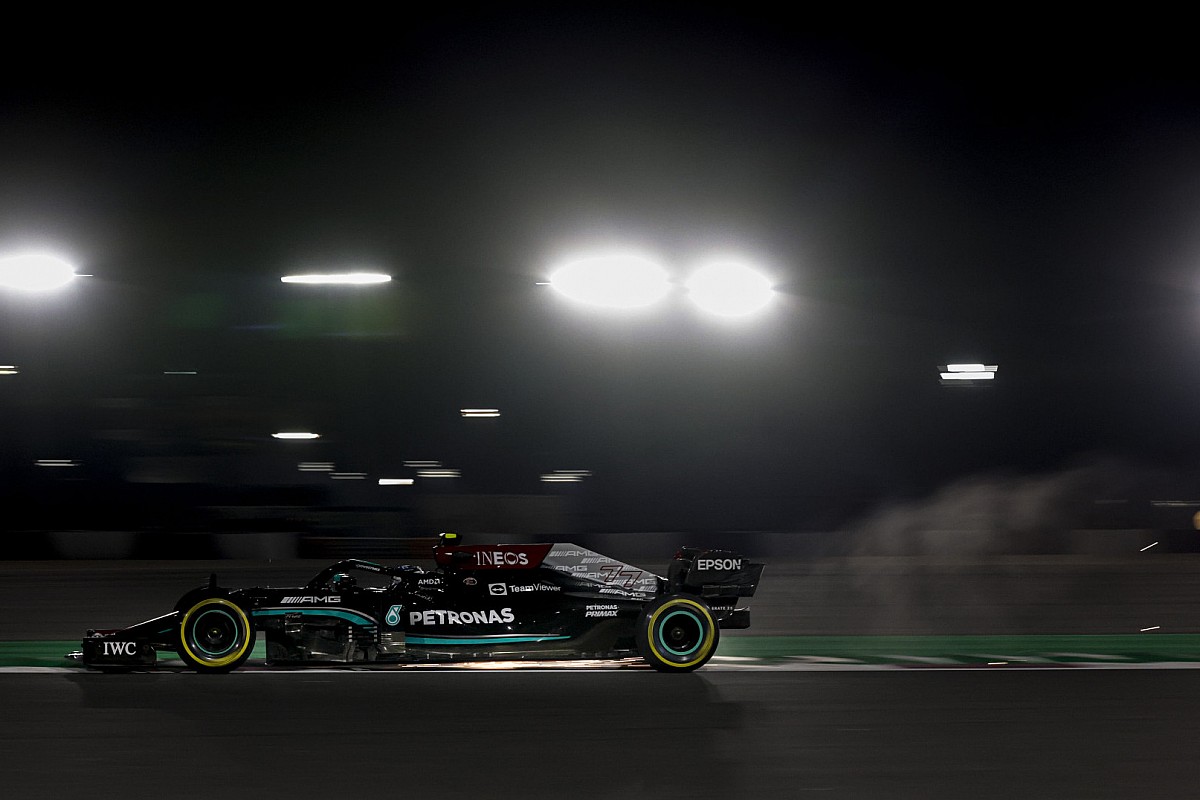 Red Bull’s Max Verstappen was fastest in FP1 but it was Bottas who set the quickest time of the day – under the floodlights in FP2 – at 1m23.148s.

Pierre Gasly was an impressive second fastest in both sessions for AlphaTauri.

What happened in Free Practice 1?

First practice in Qatar took place in daytime, meaning it was not fully representative of either qualifying or the race, both of which will begin at dusk in cooler conditions.

Verstappen spent the early part of FP1 on the hard compound tyre, trading fastest times with McLaren’s Lando Norris on mediums, but was able to enjoy a 0.3 second margin over the field once they had completed their initial runs.

While Bottas initially took P1 for Mercedes when making the switch to soft tyres – despite running beyond track limits on his fastest lap – Verstappen was able to strike back and post a best time of 1m23.723s.

It gave Verstappen top spot by four tenths by the end of the session as former teammate Gasly shot up to second place with a quick run using the soft tyres late on. Bottas remained third.

Verstappen’s title rival, Lewis Hamilton, could only finish the session in fourth place, 0.786s off the Red Bull’s lap. Throughout the session, Hamilton reported that his engine felt down on power, but was reassured by his race engineer that his straightline speed was not hugely down on that of his rivals.

Yuki Tsunoda was fifth for AlphaTauri, ahead of the Ferraris of Carlos Sainz and Charles Leclerc. The second Red Bull of Sergio Perez – a winner here in GP2 Asia – was only eighth in this session.

What happened in Free Practice 2?

Bottas was the first frontrunner to use soft tyres, producing 1m23.154s, with Hamilton’s opening soft run 0.416s down on that. Bottas’s time was then deleted for exceeding track limits but he then ran again, producing a 1m23.148s – the fastest time of the day.

Gasly had a big slide at the final corner and just kept his car out of the gravel but went P2 on a second attempt on the same soft rubber, two tenths down on Bottas.

Verstappen produced 1m23.579s on softs after running wide, just 0.009s off Hamilton in third, then Max improved to 1m23.498s after a quick pitstop.

Lando Norris was fifth fastest for McLaren, 0.422s off the pace, ahead of Lance Stroll (Aston Martin), Tsunoda and Perez.

Nikita Mazepin – the only other driver in the field who’s raced here before – missed the session while his Haas chassis was switched as he damaged his car in FP1.